Changes to this document must be approved by the System Architect (RFC-24). To request changes to these policies, please file an RFC.

Unit testing validates the implementation of all objects from the lowest level defined in the detailed design (classes and functions) up to and including the lowest level in the architectural design (equivalent to the WBS components). The next layer of testing, known as integration testing, tests the interfaces between the architectural design objects (i.e. WBS components). This Policy only addresses Unit Testing. Refer to Introduction into testing or why testing is worth the effort (John R. Phillips, 2006) for a short, but good discussion on Unit Testing and its transition into Integration Testing.

Unit tests should be developed from the detailed design of the baseline, i.e. from either the structure diagrams or the class/function definitions. The type of tests performed during unit testing include:

The collection of a module’s white-box, black-box, and performance tests is known as a Unit Test suite. A rough measure of a Unit Test suite’s quality is the percentage of the module’s code which is exercised when the test suite is executed.

Due to the nature of white box testing, it is best if the original developer of an object creates the test suite validating that object. During later object modification, the current developer should update the test suite to validate the changed internals.

The division of responsibility between DM developer groups is highlighted in the diagram below. In essence, the Science Pipelines group, which is responsible for all science algorithm development, also develops the unit testers for: algorithm components, a Task wrapped algorithm, and the sequences of Task wrapped algorithms comprising an algorithmic pipeline (i.e. without parallel processing job management). The Middleware group, so named because it is responsible for all low level framework software, develops the unit testers for those framework modules. Finally, the Science Validation team is responsible for the highest level test plans for integration, system performance, and acceptance testing. 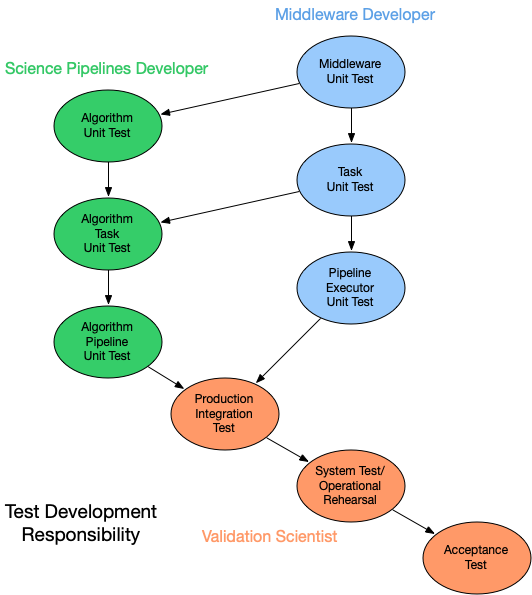 Test suite execution should be managed by a testing framework, also known as a test harness, which monitors the execution status of individual test cases.

Python: unittest
LSST DM developers should use the Python unittest framework. Details on particular conventions to use for LSST DM code are described later.

Data Management uses a bottom-up testing method where validated objects are tested with, then added to, a validated baseline. That baseline, in turn, is used as the new validated baseline for further iterative testing. When developing test suites for composite objects, the developer should first ensure that adequate test suites exist for the base objects.

Jenkins is a system which automates the compile/load/test cycle required to validate code changes. In particular, Jenkins automatically performs unit builds and unit tests expedites the module’s repair and, hopefully, limits the time other developers are impacted by the failure. For details, refer to the workflow documentation on Testing with Jenkins.

Since Unit Tests are used to validate the implementation of detailed design objects through comprehensive testing, it’s important to measure the thoroughness of the test suite. Coverage analysis does this by executing an instrumented code which records the complete execution path through the code and then calculating metrics indicative of the coverage achieved during execution.